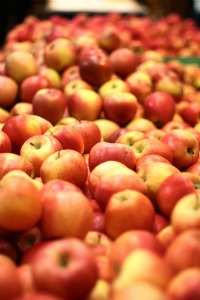 This cinnamon apple smoothie recipe is a new twist on that good old fashioned combination we all know and love.

I absolutely loved applesauce as a kid. I would devour entire bowls of it, and then go back for more.

It was the one “fruit” I couldn’t get enough of. I know, it’s not really a fruit.

But unlike all the other foods out there masquerading as “fruits”—things like Fruit Loops, fruit snacks, fruit popsicles, and so on—apples are the primary ingredient.

And I even discovered a way to make applesauce even better...and I’m sure I’m not alone in this discovery: adding cinnamon to applesauce.

There’s something about that apple cinnamon combination that’s so incredibly refreshing. It’s a completely classic combo that I just can’t get enough of...even now that I'm an adult.

But applesauce has quite a bit of sugar. And it’s still a processed food, not nearly as healthy as eating the whole, natural, raw fruit itself.

So what’s an apple-cinnamon lover to do to take advantage of this delicious combo while ensuring healthy nutrients?

That’s what led me to create this incredibly yummy apple smoothie recipe...

If you too love the apple cinnamon combo, and want to take your applesauce to the next level (or if you’ve never discovered this combo and want to give it a try), here’s the recipe...

A couple spoonfuls of applesauce (about 2 tablespoons)

½ cup almond milk (or other type of milk)

Dash of cinnamon (about 1 teaspoon or less) 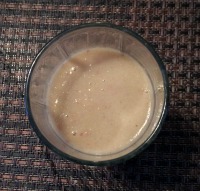 How to Make this Smoothie

Wash the apples, then chop the apples into medium-size chunks. Discard the core. Add to blender.

Peel the banana, break it into bite-sized chunks, then toss in blender.

Next add the applesauce. This is actually optional and any variety will do.

It’s better if you can get a hold of all-natural or organic applesauce. We had good old Mott’s Applesauce on hand so that’s what I used :)

Blend for at least 30 seconds, until all the ingredients are combined and nice and smooth.

It may take more or less time to get the right consistency depending on what kind of blender you are using.

Then, in a total of 5 minutes or less from start to finish, you’re ready to enjoy your new amazing creation.

At least for me, the result was pure deliciousness!

What's So Good About This Fruit Shake?

But because of all the added sugar, and because it’s a processed food, it’s actually not that good for you.

Applesauce is not the worst thing you can possibly eat, but it could definitely be better.

How to make it better? The great thing about this apple smoothie recipe is it uses a little bit of actual applesauce as its base.

But then it adds from there...fresh apples, real cinnamon. Tapping into the power of raw foods, it keeps that same applesauce-with-cinnamon flavor but makes it REAL, fresh, and oh so delicious.

I could write a whole book about the powers of apple nutrition (soon I’ll at least  write a page).

Apples have a ton of healthy vitamins and minerals that contribute to reduced risk of cancer, heart disease and other ailments.

And it’s actually one of the fruits with the highest antioxidant counts, especially considering how common it is. Plus they’re absolutely delicious!

The main reason I used a banana was for its texture, as it helps tie together all the ingredients and give it a nice smooth consistency.

But the health benefits of bananas are also quite impressive and help with digestion. I add bananas to almost all my smoothie recipes.

I actually got the idea of putting cinnamon in a smoothie from one of my friends, who wrote about in his special superfood smoothie recipes for athletes.

The cinnamon definitely gives it a sweeter taste, without adding any extra sugar.  It makes for an excellent dessert smoothie.

I enjoyed this smoothie for breakfast, and it’s really a good treat for any time of day.

A nice touch to help boost overall texture and keep it real to the apple-cinnamon classic taste.

It’s also a good alternative to yogurt that you can add to any of the smoothie recipes on this site to make vegan smoothies.

Just one option for liquid smoothie ingredients. Almond milk goes especially well in this smoothie as it helps to give it more of a milkshake, creamy texture.

Click here to read more about almond milk. If you don't have almond milk, any other type of milk can work too.

So What Did You Think?

That’s about all I have to say about this apple smoothie recipe. Give it a try and let me know what you think!

Feel free to leave a comment below…let me know what you thought of this recipe, or if you made any changes. If you have any questions about this apple smoothie recipe, you can also ask me in the comments below.

If you like apple smoothies, try this Apple Strawberry Green Smoothie Recipe

If you like more banana smoothies, try this Banana Smoothie Recipe

More healthy drinks with cinnamon...Superfood Smoothies and Snacks for Athletes

Back to Joy of Smoothies Home

Have your say about what you just read! Leave me a comment in the box below.

Disclosure: We are a participant in the Amazon Services LLC Associates Program, an affiliate advertising program designed to provide a means for us to earn fees by linking to Amazon.com and affiliated sites.